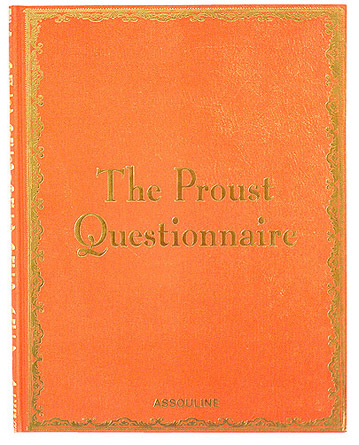 The Proust Questionnaire was originally a parlor game of the late nineteenth century designed to better know the personalities of friends and family. During this time, a teenage Marcel Proust was given a set of questions by his friend Antoinette, the daughter of the president of France. The questionnaire’s notoriety first arose when two documented versions with sets of answers by the French writer were discovered in 1924, a few years after his death. Proust believed that an individual’s answers would reveal their true nature.

The questionnaire regained popularity when French television host Bernard Pivot resurrected it as a basis for his literary interviews. Today, a revised version is regularly published on the back page of Vanity Fair magazine, with answers by various celebrities and public figures.

I’ve read these responses over time and often wondered how I would answer the tough questions myself, but never actually put pen to paper…until now.

For this exercise, I opted to use questions from the Vanity Fair version. What I found was, this was a lot more difficult than I thought it would be. I struggled with some questions, had too many answers for others, and paused cautiously about responding at all to quite a few of them.

Like Proust, I’m sure my answers may change in another 5-10 years, however for this point in time, here are my responses.

1. What is your idea of perfect happiness? After putting in a productive and fulfilling week, enjoying an evening in my own home, surrounded by close friends, great wine, good music, plenty of laughter and riveting conversation, and in the kitchen cooking a wonderful meal together. Of course, there’s always the next day when the house is clean and quiet. That’s pretty good too.

2. What is your greatest fear? The hatred of others and what it can do.

3. Which living person do you most admire? 2014 Nobel Peace Prize winner, Malala Yousafzai.

4. What is the trait you most deplore in yourself? That internal voice that occasionally creeps in wreaking all kinds of havoc. It can be a real menace if I let it.

5. What is the trait you most deplore in others? In this age of selfies and reality television, I think narcissism and self-obsession are at the top of my list at the moment.

6. What is your greatest extravagance? The gift of travel.

7. What is your favorite journey? The one I’m on.

8. On what occasion do you lie? When I feel there is an unnecessary risk of hurting someone’s feelings.

9. What do you most dislike about your appearance? My aging mid-section.

10. Which living person do you most despise? Unfortunately, there are many groups of people to despise, including terrorists like ISIS, Islamic extremists like Boko Haram, internet trolls that hide behind their keyboards, and the endless list of physical, verbal, and mental abusers of women and children. Take your pick.

11. Which words or phrases do you most overuse? I’ll have a Pinot Noir.

12. What or who is the greatest love of your life? I haven’t met the ‘who’ just yet, but the ‘what’ might be writing. Or travel. Or wine. Maybe it’s wine.

13. When and where were you happiest? I try to be happy in the present moment—each day is such a gift. But a particular instance I can think of was when I was on a 9 day culinary tour through Tuscany in 2012 – pure bliss.

14. Which talent would you most like to have? I’d love to be able to play the piano.

15. What is your current state of mind? While I am optimistic, I feel frustrated after reading too many articles of late on what I consider a global epidemic against women and young girls.

16. If you could change one thing about yourself, what would it be? I’d be wealthy.

17. If you could change one thing about your family, what would it be? They’d be wealthy.

18. What do you consider your greatest achievement?  This one is hard. I think my greatest achievement is the culmination of coming from the deep dysfunction and barrier fraught childhood I had, to living the life I’ve been able to live. Even with ongoing bumps and challenges, the experiences I’ve gained along the way, the people I’ve met—I am always amazed when I think about how far I was able to come. I’ve discovered I’m extremely resilient.

19. What is your most treasured possession? My mind.

20. What do you regard as the lowest depth of misery?  The moment when hatred and fear turn into action.

21. Where would you most like to live? I live in the great city of Chicago already, but I’d love to reside in a beautiful, limestone façade walk-up some day—very European style. I’ve also always dreamed of having a second home in Italy. I’m still working on both of these.

22. What is your favorite occupation? Writer. Or sommelier. Are you noticing a theme?

24. What is the quality you most like in a man? Compassion.

25. What is the quality you most like in a woman? Healthy self-confidence and bravery.

26. What do you most value in your friends? Their genuine support, laughter, and unique ability to expand my world.

27. Who are your favorite writers? I don’t read any of the contemporary fiction that most read, so I don’t have a list of modern authors at the ready. I’ve always loved anything Agatha Christie, I enjoy the style of Elizabeth Gilbert, and M.F.K. Fisher was a wonderful food writer (as were Elizabeth David and Judith Jones). I admire classic writers such as E.E. Cummings, Ernest Hemingway, Walt Whitman, Jane Austen, and Emily Bronte. My favorite childhood book was The Boxcar Children by Gertrude Chandler Warner, so I would be remiss if I didn’t mention her given it launched my love of books and stories.

28. Who is your hero of fiction? Not sure I have a fictional hero—my heroes are real people—but I loved the character of Josephine March from Little Women, and her story. Her fierce independence, chutzpah, and driving sense that she wanted more for herself in a time where women were expected to only marry and have children were admirable qualities.

29. Who are your heroes in real life? There are so many great women that I admire for their courage, wisdom, and bravery. Women like Gloria Steinem, Malala Yousafzai, Hillary Clinton, Jill Abramson, Amelia Earhart, Arianna Huffington, Oprah Winfrey, Katherine Hepburn, and Coco Chanel are just a small selection. I think about these women often as they inspire my actions every day.

30. What are your favorite names? I actually like my own first and middle name—Tara Siobhan. I like that they are still considered unique.

31. What is it that you most dislike? Right now, selfies, political ads, and guns.

32. How would you like to die? Quietly in my sleep, in my own bed, while the music of Debussy plays in the background.

33. What is your motto? To quote George Bernard Shaw, “We don’t find ourselves, we create ourselves.” I am on a constant journey creating myself.

Have you ever filled out the Proust Questionnaire yourself?  Anything surprising in your findings?  Did you find it difficult or easy to respond to all the questions? 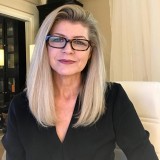